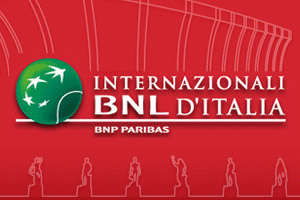 The Internazionali BNL d’Italia is the most important Italian tennis tournament both in men (ATP) and women (WTA) tours. Many experts, fans and players consider it the most important world tennis tournament on clay courts after Roland Garros Grand Slam. They are part of the ATP World Tour Masters 1000 that groups the 9 most prestigious tournaments after the 4 of the Grand Slam.
Together with Roland Garros and Montecarlo Open, the Internazionali BNL d’Italia are the so-called Red Slam, in other words the tryptich of tournaments in sequence on red clay surface considered as the most important in the world on that surface.
The tournament will take place from May 4th to 15th and will be, as last year, a combined event with men and women matches that are played all the 9 days. So in the same day it will be possible, as it happen in the 4 tournements of the Grand Slam, to admire all the protagonists of the international circuit: Djokovic, Federer, Nadal, Murray, Sharapova, Serena Williams and the new stars: Bouchard, Halep and Muguruza.
Of course the aficionados will be able to support the Italian athletes that will take part at the tournement: Fabio Fognini, Andreas Seppi, Simone Bolelli, Sara Errani, Roberta Vinci, Camila Giorgi, Francesca Schiavone, Karin Knapp and the young emerging Matteo Donati and Gianluigi Quinzi.
For this very important event, AVS Group has won the bid issued by FIT Italian Tennis Federation, to supply all ledwall screens that will be used on the courts and in the area of Foro Italico, something we are obviously proud.
Our technicians will be engaged in the assembly of the following technologies: